Indian railways - a way of life.

Photo by eberhard 🖐 grossgasteiger on Unsplash

Subscribe to my newsletter and never miss my upcoming articles

Indian railways is a statutory agency that manages entire India's national railway system and is maintained by the Ministry of Railways, Government of India. As of March 31, 2022, it administers the world's fourth-largest national railway system, with a total route length of 67,956 kilometers (42,226 mi). On daily basis, it runs 13,169 passenger trains both long-distance and suburban routes almost covering 7,325 stations across India. 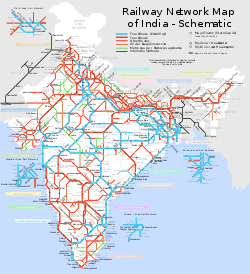 Clearly, Indian railways have been one of the go-to options to travel from one to another. This blog is mainly intended to discuss how we can visualize the railways' data as per the station directly on the map.

Indian Railways data was collected by Sanjay and Sajjad.

To know more about the difficulties they faced while collecting the data - mainly to maintain the authenticity, you can read it from here.

There are mainly three files -

In Addition to this, I downloaded the shape file of India that contains the boundaries of the states.

As always we begin with importing the packages that are essential for this project.

The files stations.json and trains.json need to be converted into shape files and thus the data can be easily manipulated further using the geopandas package.

In the stations shape file, there are so many missing values (especially in the state columns. In order to get the state name, we need to perform spatial join keeping stations on the left and Indian states' boundaries on the right.

Similarly, in the trains shape file, there are some stations that contain multiple states. The following is the list for the same.

Now that the data is prepared, we can use Plotly to get an interactive map plot.

With the above function, we can plot the stations by providing the state_name param.

With the above function, we can plot the train paths by providing the state_name param.

With the above function, we can plot the train paths provided from_ station.

Using all the procedures above and other packages (like dash) that support Plotly figures, we can develop a full-fledged web application.

Since we have two aspects stations and trains, we can create HTML tabs and accordingly display the map.

Apart from just having state_name it also has additional inputs such as displaying the boundary of the state.

The below plot shows each stop from the from_ station to all the remaining stations.

The below plot does not show any stops but all the stations from the from_ station in the form of a network.

from station to station

If we select a specific to_ station, we get to see additional details of the train like -

The map for the same is below.

Well, that's it for this article. You can find my work in the below links.